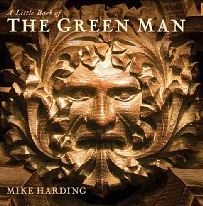 The Face In The Leaves 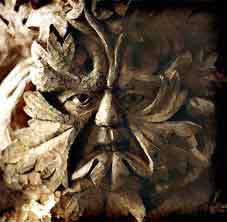 is face stares down at us from the roofs , pillars and doorways of our great cathedrals and churches, he appears on second century Roman columns in Turkey and in Jain temples in Rajasthan. He is found all over England, some parts of Wales and Scotland and a few rare places in Ireland.

On the continent he has been seen and noted in Germany, France, Italy, Holland and is said to be found in Spain, Hungary and Poland. India and Malaysia have their own Green Man and though he doesn’t seem to appear in Native American traditions he can be seen in his modern role as a bringer of fortune on the walls of banks in New York and Chicago.

His roots may go back to the shadow hunters who painted the caves of Lascaux and Altimira and may climb through history, in one of his manifestations through Robin Hood and the Morris Dances of Old England to be chiselled in wood and stone even to this day by men and women who no longer know his story but sense that something old and strong and tremendously important lies behind his leafy mask. One of the earliest English epic poems Gawain and The Green Knight may refer to yet another manifestation of the Green Man as the God that dies and is reborn. He is the Green Man, Jack in the Green, the Old Man of the Woods, Green George and many other things to many other men but one common theme runs through all the disparate images and myths, death and rebirth and the Green that is all life.