A Little Book of Miracles and Marvels 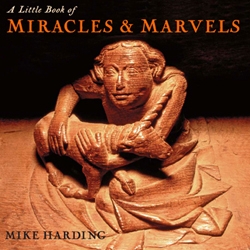 A Little Book Of
MIRACLES & MARVELS

Humankind has always loved a mystery or a miracle: in mediaeval times witches rode on broomsticks; nowadays crop circles appear in our cornfields. The most extraordinary myths, the strangest otherworldly creatures intrude even into our churches and cathedrals, on roof bosses, carved misericords, in stained-glass windows, often dramatising fables of good versus evil or, as with the pelican feeding its young with its own drops of blood, symbolising Jesus Christ himself. Otherwise, in monstrous, grotesque, supernatural forms, they speak of the world we don’t understand, can’t control, fear in the dark, but also all that makes life more than mundane – indeed, amazing and infinite. Here, then, from Mike Harding’s travels round Britain’s churches and cathedrals, is a mesmerising array of mythical creatures and miraculous events: dragons, mermaids, unicorns, wyverns and wodwos, as well as Noah’s Ark, Jonah and the Whale and David and Goliath.

Mike Harding’s first four Little Books for Aurum, published nine years ago – Gargoyles (9781854105615), Green Men (9781854105639), Misericords (9781854105622) and Stained Glass (9781854105646) – have each sold between 20,000 and 30,000 copies and reprinted numerous times. Miracles & Marvels collects together from our churches and chapels the extraordinary array of mythical creatures, magical characters and legendary events. Here are mermaids, dragons, wyverns, unicorns, the little woodland creatures called wodwos, as well as miraculous events like The Legend of the True Cross, Jonah and the Whale and The Three Hares. There are battling dragons (from Durham Cathedral) and a cheerful little dragon (in Wirksworth, Derbyshire); the wyverns – photographed in Ripon and Canterbury Cathedrals – were fire-breathing creatures with he head of a dragon, the body of a snake, and both legs and wings. Such a magnificent gallery of mythical creatures have all been found by Mike Harding – and superbly photographed – within our own ancient Christian churches, a remarkable insight into the richness and strangeness of our cultural heritage.